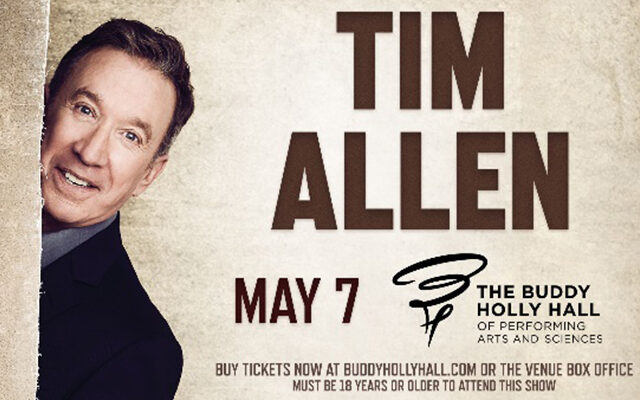 Lubbock, TX – Award-winning actor and comedian Tim Allen will bring his stand-up comedy to The Buddy Holly Hall of Performing Arts and Sciences on May 7, 2022, at 8 p.m.  Most recently, Allen starred on the hit sitcom “Last Man Standing” which aired its ninth and final season on FOX in 2021. Allen starred as Mike Baxter, a happily married father of three daughters, who finds himself the odd man out as he tries to maintain his manliness in a home dominated by women.

Allen was also the star and executive producer of the competition series “Assembly Required” which premiered in February 2021 on HISTORY. Allen reunited with his “Home Improvement” co-star Richard Karn who served as series host, marking the 30th anniversary of the pair’s original television debut.

He made his film debut in 1994, playing a holiday icon in “The Santa Clause,” earning him another People’s Choice Award.   In 1995, he voiced the beloved, yet deluded, space ranger Buzz Lightyear in the CGI smash hit “Toy Story.” In 1997, Allen starred in the hit comedies “Jungle 2 Jungle” and “For Richer or Poorer.”

To the delight of moviegoers, in 1999 Allen reprised his character Buzz Lightyear in “Toy Story 2” which grossed over $250 million.  In 2002, Allen helped kick off the holiday season that year reprising his role in, “The Santa Clause 2.”   In 2004, he starred opposite Jamie Lee Curtis in the comedy “Christmas with the Kranks.”

Allen continues to perform stand-up shows to sold-out crowds across the country. He honed his talents as a stand-up comic throughout the eighties, providing the perfect lead-in to his highly successful ABC television series “Home Improvement” where he garnered a Golden Globe Award, an Emmy nomination, and was honored with the People’s Choice Award for “Favorite Male Performer in a Television Series” for an unprecedented eight years in a row.

December 8th, 2021
View full playlist
Latest Podcasts
Connect With Us Listen To Us On