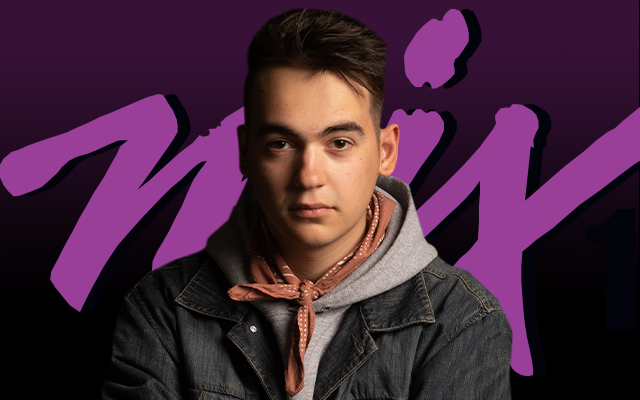 In the Mix with Alex Angelo

Pronouns: He, Him. Born in Florida, and growing up in Ohio, primarily Cleveland and Cincinnati, Angelo recalls that his earliest musical motives were driven by his love for dance and djing. At the age of 7, Alex was dancing for the Cleveland Cavaliers. At the age of 10, he was Djing in the arena during games. At the age of 12, he had a weekly radio mix show on Radio Disney. Alex’s mom is a public school music teacher, and Alex decided early on that he wanted to be the artist ON the records, not just playing and dancing to the music. Through his teens, Alex toured with Austin Mahone, Jake Miller, Shawn Mendes, Fifth Harmony and self-released several songs that have totalled millions of listens on Youtube, Spotify, Apple Music, etc. Now 20, living in Nashville, TN, Alex has grown as a producer/songwriter learning from the likes of Kenneth “Babyface” Edmonds and Antonio Dixon. (Chris Brown, Bieber, JOJO, Omarion). Patrick “J. Que” Smith (Usher, Britney Spears, Jennifer Lopez, Beyoncé, Fantasia Barrino, Ciara, Avant, Chris Brown, Ariana Grande, The Gospellers, and Omarion.) His mentor continues to be collaborator, songwriter, producer and engineer, David “DQ” Quiñones. (Beyonce, Jason Derulo, Demi Lovato). He continues to songwright and produce music for himself and other artists. His goal for this new radio show is to meld his skills as a DJ and a Producer to create some buzzworthy, exciting mixes and sounds that are exclusively In the Mix with Alex Angelo.

Alex is a tech guy, gamer and fashion/sneaker fan. When he isn’t working on music, he’s relaxing at home with a candle lit, gaming on his big bean bag with his PS5. Alex plays the guitar and piano. If he were to only be able to take one thing to a stranded island, it would be his Apple Macbook Pro. He loves apple products- iPhone 12 user. Watches Netflix, HBO MAX, YouTube and Youtube TV. When it comes to food, Alex likes Chipotle, In N Out, Chick-Fil-a- and is a heavy user of food and grocery delivery services. He has a cat, LEO, who has his own Instagram page. Alex loves flavored water drinks (Hint, Pellegrino, and those kinda healthy water drinks with flavor) Alex enjoys coffee, nutrition drinks and eating healthy. He works out in the gym, and you might catch him at Millenium Dance in Nashville on any random evening learning a new routine, or recording a dance video. Alex learned to dance while dancing for the Cleveland Cavaliers and has studied with some of the most well known choreographers in LA (Choreographers for Chris Brown, Usher, Michael Jackson). Alex drives a VW Jetta. His cell service is T-Mobile. Brands that he loves: Adidas, Nike, Converse. Artists that he would love to follow: Pharell, Justin Timberlake, Diplo, Bruno Mars.

Alex is an endorser/spokesperson for Free2luv, a non-profit organization dedicated to stop bullying and hate, and on a mission to support youth, bully prevention, LQBTQ, mental health, anxiety & suicide prevention through arts and storytelling. Alex grew up while attending public school, doing “different” things and having experiences that his peers didn’t have. While kids were playing soccer, Alex was touring the country. He was bullied for being different. He was judged and bullied in school, and online. He knows what it’s like and how hard it is for kids. He has always said, “Hey, I’m a strong kid. I can deal. I have amazing parents and things that other kids say can be hurtful, but I have an amazing support system around me to deal with these issues. I feel bad for the kids that don’t have the same level of support that I do. I hate that some people can be so nasty to others. I know it’s hard. I just always try and tell kids to find a support system, and it will get better.”

Connect With Us Listen To Us On